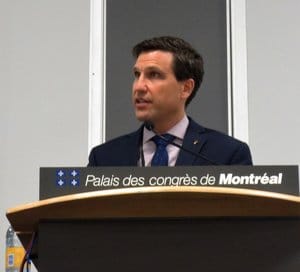 According to Jean-François Fortin, the executive director of enforcement at the Autorité des marchés financiers (AMF), there are two ways that regulators can prevent and deter fraudsters. “First the certainty of being caught. And second, the certainty of punishment.” One way to confirm these certainties is through what he calls credible deterrence. Fortin spoke about a credible deterrence paper he helped to recently publish, as well as the AMF’s first whistleblower program and cyber intelligence unit, at the 2016 ACFE Fraud Conference Canada this week in Montréal. As said in the paper, Fortin defined credible deterrence as, “Deterrence occurs when persons who are contemplating engaging in misconduct are dissuaded from doing so being they have an expectation of detection and that detection would be rigorously investigated, vigorously prosecuted and punished with robust and proportionate sanctions.”

In 2015, the International Organization of Securities Commissions (IOSCO) published this paper that identified seven key factors that contribute to deterrence. Fortin currently sits as the vice-chair on this committee and will chair the committee beginning in December. He specifically mentioned three best enforcement practices that have been adopted by many regulators around the world:

Fortin discussed the importance of the second best practice: cooperation between different parties. The AMF was the first governing body in Canada to set precedent and create a cooperative, formalized relationship between the AMF, the Royal Canadian Mounted Police, the Sûreté du Québec and local prosecutors. “Our partnership avoids duplicate work,” Fortin said. “We learned from previous cases that a competitive approach will hinder the process and the progress of our investigation, and will not lead to an optimal enforcement outcome. Cooperation created a better allocation of our own resources and the court’s resources.”

Fortin also spoke about the AMF’s recent launch of its very first whistleblower program. Fortin said that since its launch in June, the AMF has received 18 tips, 72 percent of which contained information that led to investigations that otherwise would not have been received. “Thanks to these whistleblowers, who without those protection measures would not have come forward, we will be able to identify more offenses, intervene earlier and minimize the repercussions of fraud on victims,” Fortin said.

In addition to launching a new whistleblower program, the AMF also created its first investigation unit focused on cyber surveillance. The need for this unit came about after a specific case in July 2009 of a man named Earl Jones. Jones was not a registered securities advisor and ran a Ponzi scheme unnoticed for more than 25 years. “That triggered a question, ‘How can we identify non-regulated, non-licensed individuals that are providing financial services and advice to investors.’”

According to Fortin, the AMF responded to that question and in April 2010 launched their first dedicated cyber surveillance unit. Since then, the AMF has created a team of five people that deal with approximately 100 cases a year. “We use software programs to identify businesses offering these services without begin authorized to do so,” Fortin said. “Our main focus is to cease illegal activity and gather evidence we need in court. I am proud to say that after six years, the AMF team has targeted 459 cases, and almost half of them resulted in actions taken by the AMF.”

Fortin and the AMF have made exceptional strides in the global fight against fraud. Their critical deterrence paper jointly created with entities from all over the world, their whistleblower program and their surveillance unit all stand as examples of the power of collaboration and a true passion to eliminating corporate misdeeds.

“After eight years of practice at the AMF, I find my role today profoundly inspiring and motivating. And, I am convinced that you all feel the same,” Fortin told the group of more than 200 fraud fighters. “I think the reason for that is that white-collar crime may destroy lives of people and profoundly affect the integrity of our financial markets. I have in mind examples of lives of families that are destroyed because of fraudsters and dishonest persons. I come to work every day with the same inspiration and motivations to protect these people from fraudsters. We may come from different organizations, but we all have a mission: protect the potential victims of fraud.”